Everything you have to know about the Christmas lighting in Málaga

As it has become tradition in Málaga, at this time a great expectation is created among locals and visitors from other provinces who come every year to the city center to see the spectacular Christmas lighting in Málaga becoming a point of interest and a must to visit in the heart of the city.

How and where to see the Christmas lighting?

The Christmas lighting in Málaga takes place every year at Marqués de Larios street and Plaza de la Constitución, point where visitors can see a unique show that runs through this central area of ​​the city. This year the lighting will take place on Friday, November 24, 2017 at 7:30 p.m. After the great success of last year, the shows will be repeated at 18:30 and at 21:30. We can hear Christmas songs and each pass will last from 2 to 3 minutes. All the lighting and the spectacles of lights and sounds will remain in the streets of the center of Málaga until the 6th of January.

After two years in which the City Council of Malaga decided to use the same design for the city center lighting, which used more than 600,000 LED lights, this year has opted for an innovative design that makes a clear reference to The Cathedral of Malaga. In the inauguration day, there will be a children’s party in the Plaza de Las Flores where more than 1.000 balloons will be distributed among the youngest.

The company responsible for Christmas lighting is Ximénez Illuminations, also responsible for the lighting of different companies and cities around the world, such as in New York on Fifth Avenue, Las Vegas, Dubai or even in Hong Kong.

What to do after the lighting

If you decide to go through the center to see the Christmas lighting, the show does not end here; the center of Málaga is decorated in a special way in these dates and places such as Calle Alcazabilla, Sagasta, Souvirón, Plaza de Camas, Calle Herrera del Rey, Puerta del Mar, Calle Moreno Carbonero, Calle Álamos and Calle Granada. Without forgetting key points of the city such as the Paseo del Parque, or the surroundings of the Cathedral, which are a must to live the authentic spirit of Christmas that lives in Málaga at this time. Another excellent idea is to do a free tour around Málaga. 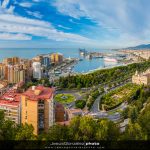 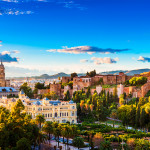 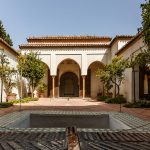 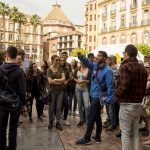