7 Curiosities of the Alcazaba of Malaga

The Alcazaba is a historical monument of the city that every year more than 500,000 people visit. In Explora Malaga we want to tell you a little more about the history of this emblematic construction, as well as the best curiosities of this great fortress that you have never heard before, in case you dare to do a free tour of the Alcazaba of Malaga with us 😉 .

History of the Alcazaba 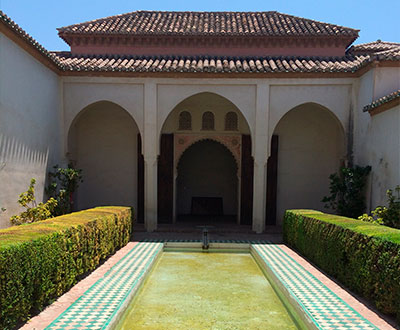 The Alcazaba of Malaga is a fortress palace built between 1057 and 1063 by the Muslims and at the request of the king of Taifas Berber in Granada, which used elements of the ancient Roman theater that sits at the foot of the palace. Due to the Muslim origin of the Alcazaba, its name arises, which in Arabic takes the meaning of ‘citadel’. Without a doubt it is one of the historical and iconic monuments of the city, an excellent place to visit and learn more about the history of Malaga. The Alcazaba is located in a strategic place since it is located at the foot of Mount Gibralfaro, which is connected and used as an Arab defensive castle. It’s in the year 1279 with the conquest of the Nazarite kingdom when the Alcazaba was reformed, obtaining the current image with its Arab courtyards and gardens. Its rooms that, in the tradition of the architecture of Granada, look for in the interiors the alternation of lights and shades to achieve those games that dominate the Arab buffs so well.

7  Curiosities of the Alcazaba of Malaga

The site is accessible for people with reduced mobility.

Do you want to know all the curiosities of the Alcazaba of Malaga?

In Explora Malaga we offer you the option of doing a free tour in the Alcazaba of Malaga, you will discover all the secrets of this greatfortress at the hands of our guides. The free tour to visit the Alcazaba is one of the most demanded tours by tourists who visit the city during, practically, any time of the year. Do you want to book or get more information about our free tour of the Alcazaba? Click here and find out.

Practical information to visit the Alcazaba

Free visit every Sunday from 2:00 p.m. and until its closure.
* Residents in Malaga city, children from 6 to 16 years old, schoolchildren or holders of the student card retired or pensioners, large families.

Where is the Alcazaba of Malaga?