The Castle of Gibralfaro, The Fortress of Malaga

For anyone that doesn’t know it, the Gibralfaro Castle was built during the XIV century with a purely millitary objective in mind, to house the troops and defend the Alcazaba and the city of Malaga. After the Catholic Kings conquered the castle in 1487, Fernando The Catholic made the castle his temporary residence. In fact, the Gibralfaro Castle was one of the best constructions at the time due to its great height and two levels of walls and barricades around it and eight defensive towers that made it prepared for any kind of attack.

The Castle can be divided in two parts. The superior section is the main patio area where the main tower is located with its height of 17 meters; also in this area there’s the well and restrooms. The Well of Airón was excavated through solid rock and goes down around 40 metres. On the other hand, the inferior section, also known as the weapon area, was where all the barracks for the troops and cavalry were.
An interesting fact about the castle is that it connects directly with the Alcazaba, which was great as the royal family could always be protected by going into the castle during enemy attacks.

It’s also worth mentioning, that the Gibralfaro Castle is now on the emblem of the flag of the city of Malaga, which shows how important the castle really is and has been since its construction.

How to get to the Gibralfaro Castle

For tourists visiting Malaga, it may be difficult to imagine the easiest way to get up to Malagas Gibralfaro Castle. There are three way to get up, that depend on how much time you have. The first way is to go up in ones own car but, if you don’t have this option there’s also a bus that goes up, the bus is number 35 and leaves from the bus station. The last way to get up is only for people that are interested in an adventure as it means walking up to the castle. If you have the time we really think that the last option is the best way to really experience the area and enjoy all of the beautiful gardens and phenomenal views and also have a look from the Gibralfaro viewpoint. If you wish to walk up, we recommend you start on the stairs next to the Municipal Museum on Paseo de Reding. 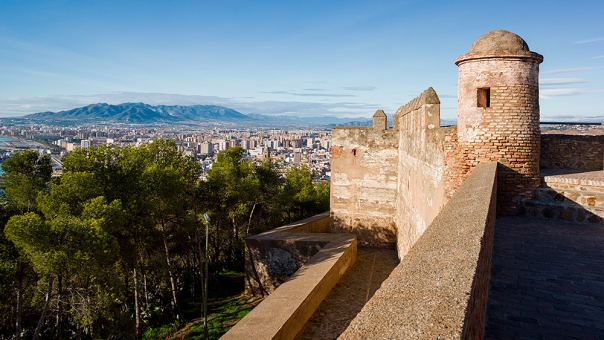 As soon as you arrive at the castle, you’ll see a small museum that will show you how life was in the fortress. In the museum you can see a model of Malaga, the Alcazaba and the castle. Also, there’s a number of weapons and millitary uniforms from the XVI century presented. The experience is completed with the incredible views from the castle.